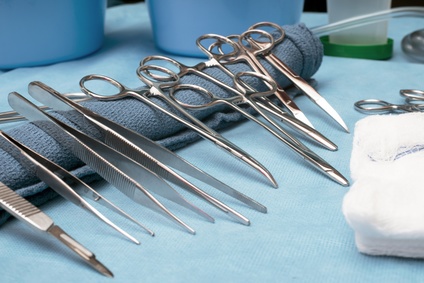 It is something no one wants to think about—but it happens more frequently than you think.  When your surgeon sews you up, he or she may leave something besides a scar behind.

Items left in the body are called “retained surgical items (RSIs),“ “retained surgical bodies (RSBs)” or “unintended retention of foreign objects (URFOs).”  The number of items that can be left behind after a surgery is startling.  Consider this list from The Joint Commission:

Of these, cotton gauze surgical sponges are the most commonly occurring RSI.  Forgotten objects are more commonly found in the abdomen, pelvis, the vagina, and the chest, in that order.

A recent report in the New England Journal of Medicine (NEJM) discussed a case involving a 42-year old woman who had been complaining of abdominal bloating for three years.  The woman had given birth via caesarian section six and nine years previous. Ultimately, scans identified two pelvic masses and surgery removed two “hyper dense, stringy structures,” that had been encapsulated and attached to the stomach and colon of the patient.

The masses turned out to be gauze surgical sponges left behind during one of her C-sections that had been encased by the body inside thick tissue membranes.  Once the sponges were removed, the symptoms of the woman resolved and she left the hospital within five days.

Mistakenly leaving an object in a patient’s body after surgery is a serious problem.  As noted by The Joint Commission, RSIs could cause infection, discomfort, internal harm, or death.  Common reasons for these medical mishaps include:

Based on the report of The Joint Commission, healthcare and surgical providers have worked to put best practices in place to avoid leaving objects behind, including counting tools and sponges during surgical procedures.

Research indicates that approximately 88 percent of RSBs occur after a surgical count of tools and sponges is declared accurate. As a result, recommendations were made to count surgical materials before the procedure, when new items are introduced, before closure of the body cavity, when the closure begins, and after closure of the skin.

While leaving a surgical setting with all the materials that you started with seems easy enough, retained surgical bodies continue to plague patients and impact healthcare outcomes.  If you are told you have an RSB, get good medical—and legal—advice.

If you are the victim of medical malpractice, the law firm of Schochor and Staton, P.A. is on your side.  With a successful track record of negotiating and litigating satisfying compensation for patients injured by medical mistake, our legal team can help. Call 410-234-1000 or contact us to schedule a free consultation to discuss your options.