The battle to end nicotine addiction and its associated diseases and death has consumed our nation’s public health resources for more than half a century. In 2014, rates of smoking and nicotine addiction in this country were finally at an all-time low, particularly among teenagers. Then, in 2015, JUUL was launched.

JUUL Labs, Inc. is an electronic cigarette company known for its JUUL e-cigarette, a vaping device used to deliver high concentrations of nicotine through nicotine salts from leaf tobacco packaged into one-time use cartridges. JUUL was a pioneer in the vape industry to the point that the term “juuling” is synonymous with using e-cigarettes. JUUL’s ads appeared on Cartoon Network and Nickelodeon, educational sites for middle school and high school students (such as coolmath.com), and targeted websites for young girls (such as Seventeen Magazine).

Now, the United States faces a youth nicotine epidemic of historic proportions. The Surgeon General has warned that this new “epidemic of youth e-cigarette use” could condemn a generation to “a lifetime of nicotine addiction and associated health risks.” Despite how they have been marketed, JUUL products are not safe, with links to serious health problems and much higher concentrations of nicotine that make them even more addictive than traditional tobacco products.

Our Fight on Behalf of School Boards

Schochor, Federico and Staton, P.A. is representing nearly 50 school boards across the country in litigation against JUUL. Because JUUL targeted young consumers, school districts across the country have had to address the issue of rampant in-school vaping. Preventing in-school vaping and trying to help addicted students has become a time-consuming, expensive, and disruptive problem for school districts. Instead of putting their limited money towards valuable educational tools, school boards have had to take on expenses related to vaping prevention, from personnel costs including counseling, event monitoring, and prevention education to the installation of vaping detectors in restrooms and disciplinary actions.

Schools and school districts deserve advocates who can help them recover the costs incurred, and that will be incurred, due to the vaping epidemic that JUUL has profited from. With more than three decades achieving outstanding results for our clients, more than 45 districts having turned to Schochor, Federico and Staton, P.A. We are committed to bringing responsible parties to the table, or the courtroom, to pay for the damage wrought by the intentional promotion and distribution of addictive drugs. SFS also represents over 60 cities and counties in National Prescription Opiate litigation.

Get The Help you Need

Get Your Free, Confidential Consultation Today!

December 2, 2021: How FDA approval of e-cigarettes can benefit Maryland schools

September 27, 2021: Horry County Schools board to file suit against JUUL for vaping epidemic

July 21, 2021: Wake County Board of Education approves lawsuit against JUUL 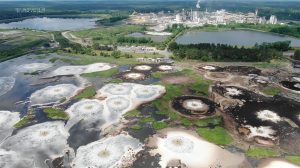 After our experienced legal team recently reached a $205 million settlement in what is believed to be the largest resolution of nitrate groundwater contamination in history, we led an investigation into Catawba, South Carolina company New-Indy and its pollution. With our team of environmental experts, engineers, and toxicologists, we found that as early as November 2020, New-Indy has been polluting neighboring properties with noxious and harmful hydrogen sulfide emissions. Our lawsuit on behalf of plaintiffs was filed on June 8, 2021, and on December 8, 2021, SFS founding and senior partner Phil Federico was appointed interim co-lead class counsel in the case.

As JUUL use rises among school children, JUUL reaps enormous profits. School Boards are left to deal with the costs and consequences of JUUL’s acts. This litigation provides the opportunity to recover those costs and fund abatement. Our goal is to achieve a solution that includes compensatory damages and the funding of an allocation program to eradicate the JUUL epidemic amongst children.

Schochor, Federico and Staton, P.A. is a trusted injury law firm serving individuals as well as local governments and authorities harmed by the neglect or misconduct of others. We have recovered more than $1 billion in compensation for our clients. Listed in the Bar Register for Preeminent Lawyers and awarded the highest rating from legal ranking agency, Martindale-Hubbell, we fight to ensure justice is served and appropriate relief and remedies are achieved on behalf of our clients.

Schochor, Federico and Staton Have Been Featured In the Following Media

How FDA approval of e-cigarettes can benefit Maryland schools

The Daily RecordPhilip FedericoMay 7, 2021 Poultry is one of the fastest growing industries in the United States, as dietary...
Read More

Our attorneys have been recognized by the most preeminent legal organizations in the country.

See All Our Recognition & Awards